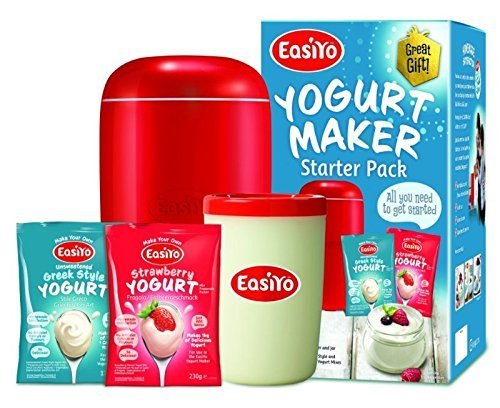 My sister has never bothered eating yogurt before but since my niece started to eat solid food, my sister insisted that her daughter grow up benefiting for yogurt’s many health benefits. The only problem was that making a habit of eating yogurt can be expensive and put a dent in a single mother’s pocket. That was when a friend of hers suggested that she get the Easiyo Yogurt Maker.

As Simple As 123
This yogurt maker is perfect for busy mothers because of its simple 3 steps. First, fill the yogurt jar with cold drinking water up to its half point and mix the contents of an Easiyo starter pack. Fill in more water, put on the lid and shake. Second, fill in boiling water inside the yogurt maker up until the red baffle after pushing the baffle down inside the yogurt maker as far as you can. Third, put the yogurt jar inside; the water should rise up around its base. Put the lid on and leave it at least for 6 to 8 hours before refrigerating it.

A tip for you: the longer you let the mixture sit, the creamier, tangier and firmer your yogurt will be.