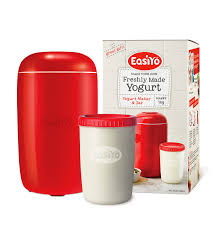 The yogurt maker is affordable, selling at $24.95 on Amazon but if you never pay for retail like my sister, look around your neighborhood to see if there are any deals. She got hers at a promotion. Not only that, she had gotten five starter pack for free. The culture packs contains milk solids and live cultures that would make 1kg of yogurt. You won’t hike up the utilities bill with this one as it doesn’t use electricity at all.

Despite it’s simplicity, the end result was nothing short of a yummy yogurt. Even my brother-in-law, who was skeptical about the taste, loves it. So, what are you waiting for? For hassle free yogurt making, head to Amazon to purchase your very own Easiyo Yogurt Maker.